First looks at the DDI5 for Amstrad CPC 464

Anyone who is active in the Amstrad scene today should be aware of the myriad of 3rd party retro hardware available today for their Amstrad CPC’s, and the DDI interfaces from Piotr Bugaj (Zaxon) are no exception.

He has recently released a new version called the DDI5 for Amstrad CPC 464. DDI stands for Disk Drive Interface and this is the 5th iteration.

So Let’s take a look. 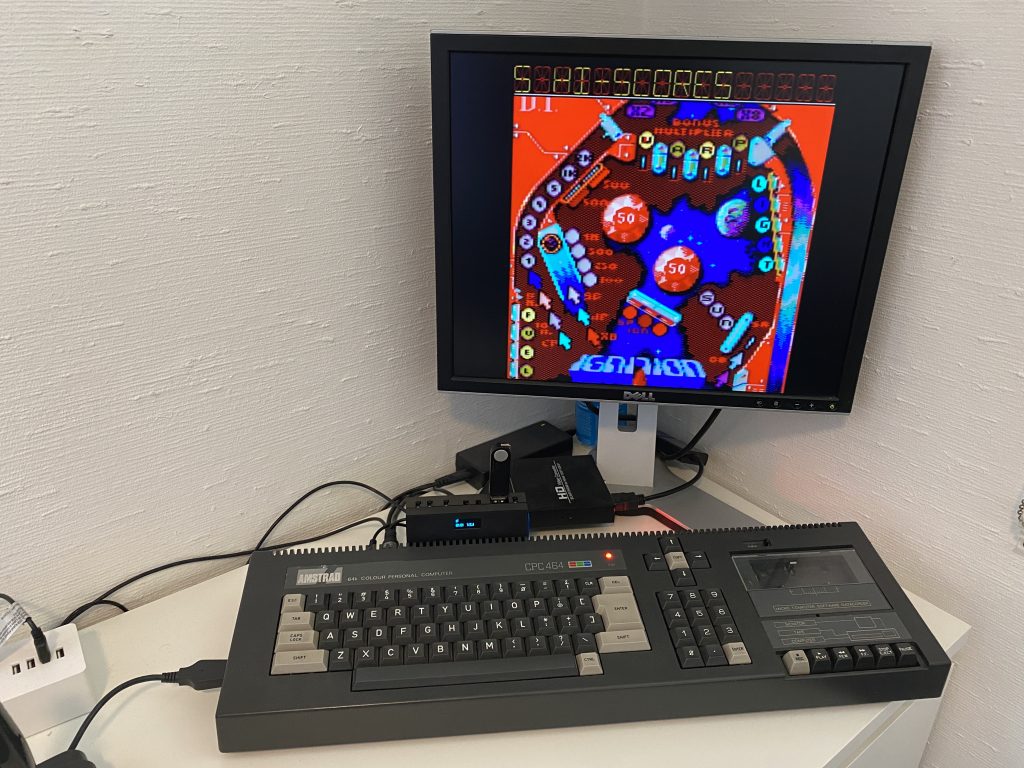 But first off, what is the DDI5 exactly ? In it’s simplest form it’s basically a floppy disc drive emulator that allows you to connect a USB drive and read DSK files on the USB drive directly as if they were floppy disks. What’s more, there’s an external FDD connector on the side of the DDI5 to allow you to connect up a real Disk Drive or Gotek drive.

What else, it has a 512KB expansion RAM pack built in (cool, check out this list of software that works with > 64k ram on a CPC) and you can flip between the built in AMSDOS rom and PARADOS 1.52. There were earlier versions of the DDI devices from Piotr, and he’s even selling the DDI4 interface currently on sellmyretro. I chatted with him to get an idea of the differences between the earlier devices and the DDI5 and here’s what he said (edited).

The DDI 3 is an earlier version of the DDI5. The difference is : DDI5 has a 3d printed case, it also has a 512 ram expansion and different display. Both the DDI3 and DDI5 have on board USB floppy emulator for loading games from a pen-drive. The DDI 4 doesn’t have a USB floppy emulator on board so you’d need your own Gotek or floppy drive to use with the DDI4.

So let’s take a look at the hardware. Below you can see the device in it’s nicely 3D printed case, complete with a small LCD and 50 pin edge connector (Amstrad 464 only). 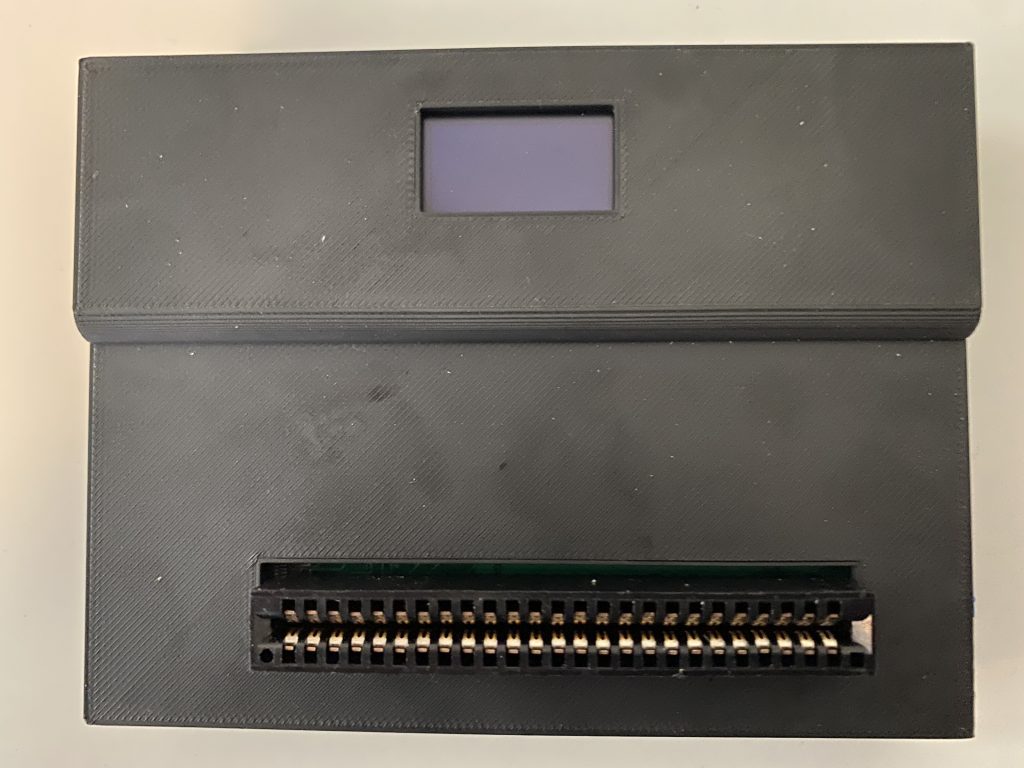 If we look at the top of the device there are a bunch of buttons, switches and a USB port. the first 3 buttons are for navigating your files/folders on the USB key. Then you have 2 switches. The first switch allows you to switch between normal AMSDOS and ParaDOS. The second switch flips the DDI from a default |a drive to |b (otherwise known as an ABBA switch). 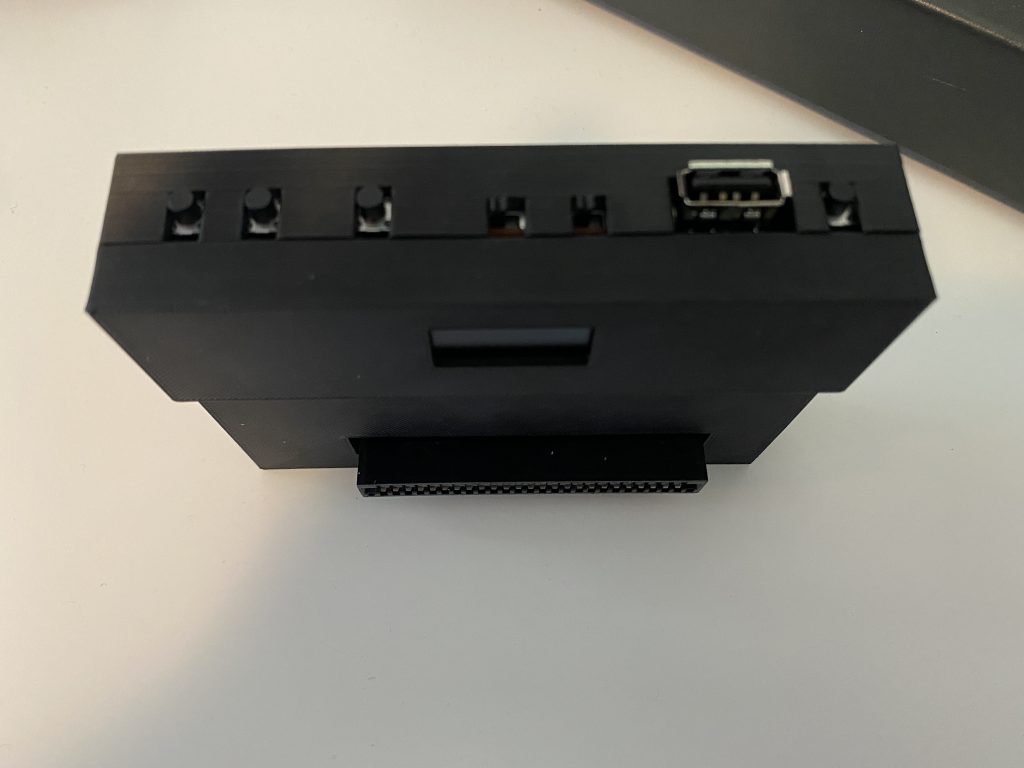 finally, to the right of the USB port is another button and that resets the CPC.

To use the device you’ll need your own USB key (or an external DDI) and copy games to that key.  I already owned another Zaxon based hardware called the Amstrad CPC USB floppy emulator , budget version 😉 which uses the same type of methodology as the DDI5 so I had a ready and waiting USB key with Amstrad games in .DSK format on it.

Plug in the USB key and then connect the DDI5 into the expansion port on your CPC 464 and power on the machine. The mini LCD should light up telling you the version of flashfloppy. 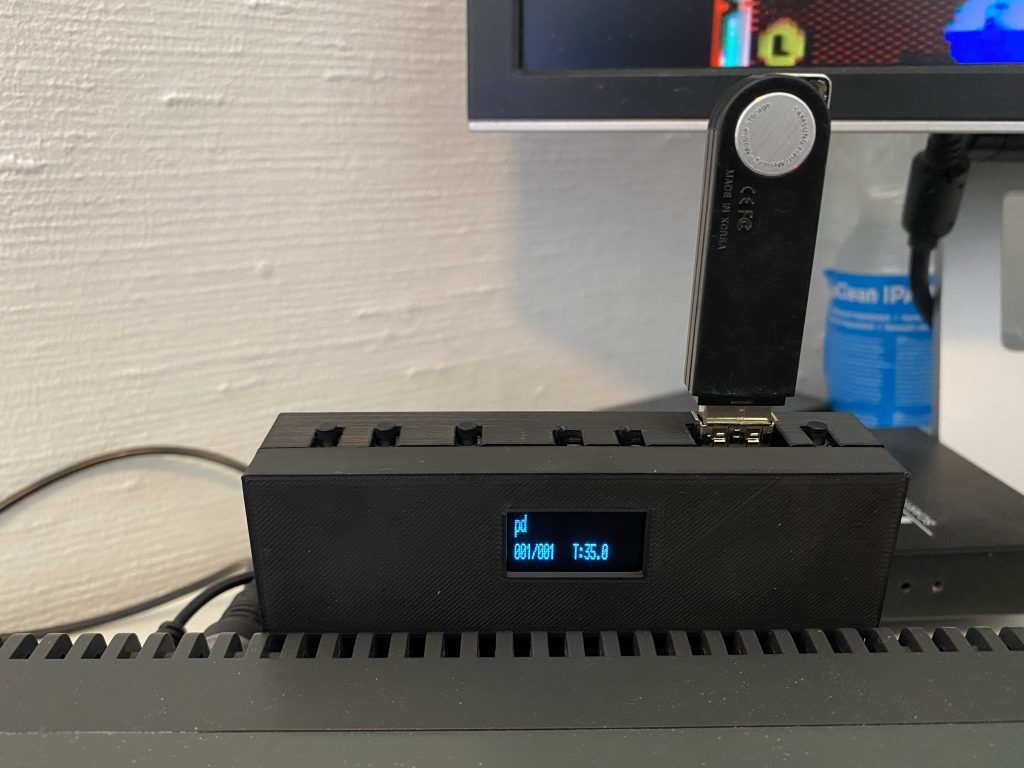 In the screenshot below it’s running AMSDOS (the built in Amstrad Disc Operating System). 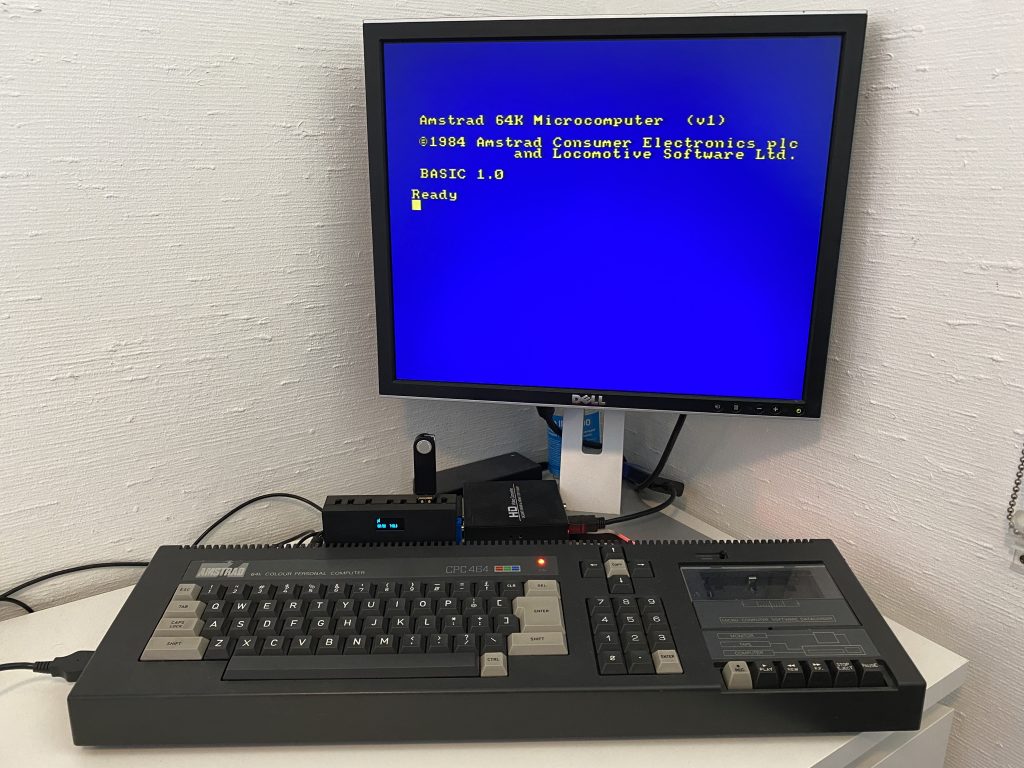 And below it’s running ParaDOS 1.2, this is done by ensuring the CPC is off and then by selecting the first of the two switches and moving it to the RIGHT. 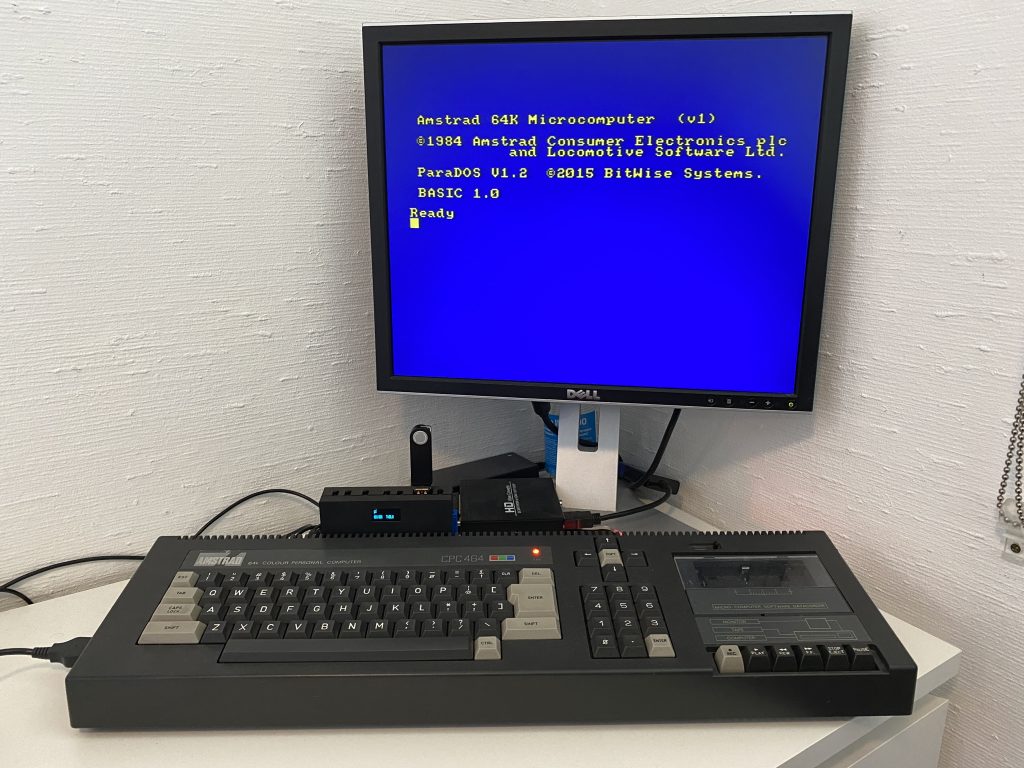 Here you can see the switch is flipped over to ParaDOS.

Changing the DDI drive from A to B and vice versa

To switch between the default |a drive to say |b, use the second switch and move it to the right most position. This will mean that the DDI5 will only respond to |b as the drive letter (|a will be reserved for external FDDs).

On the right side of the DDI5 you can see the connector to connect up an external disc drive interface or a gotek. 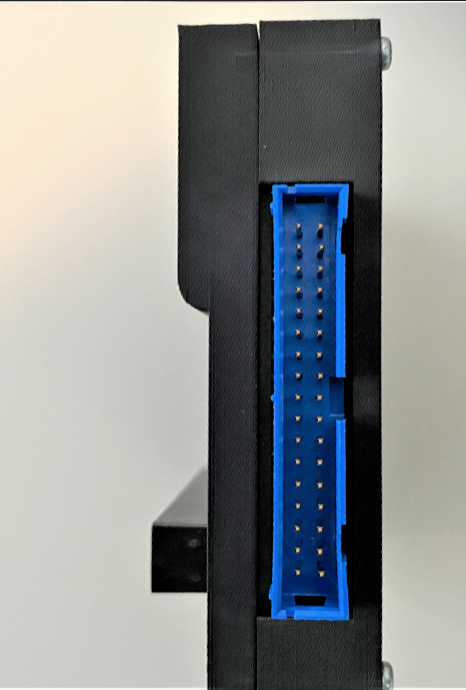 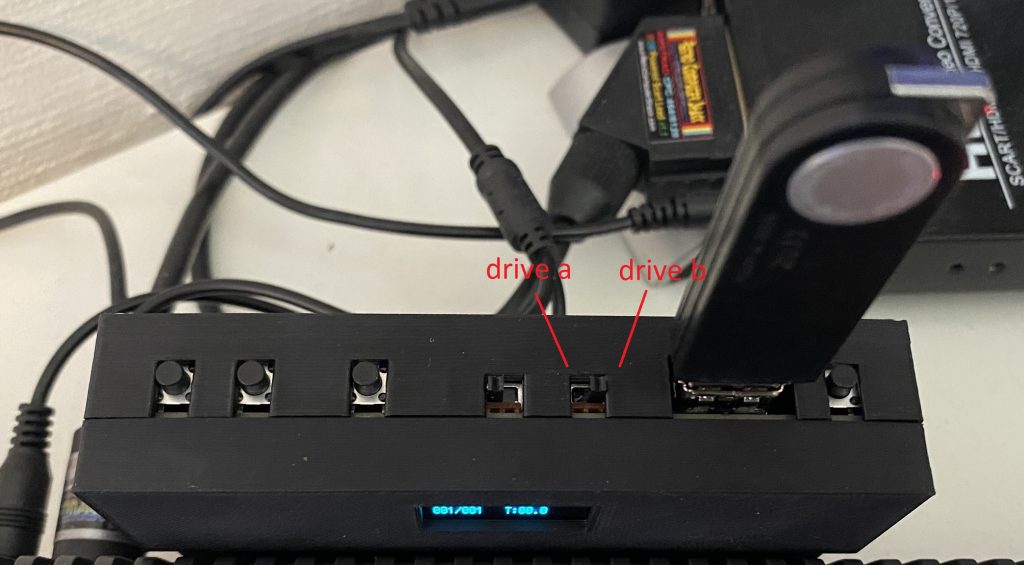 and notice how the CPC use the DDI5 as drive letter B here. 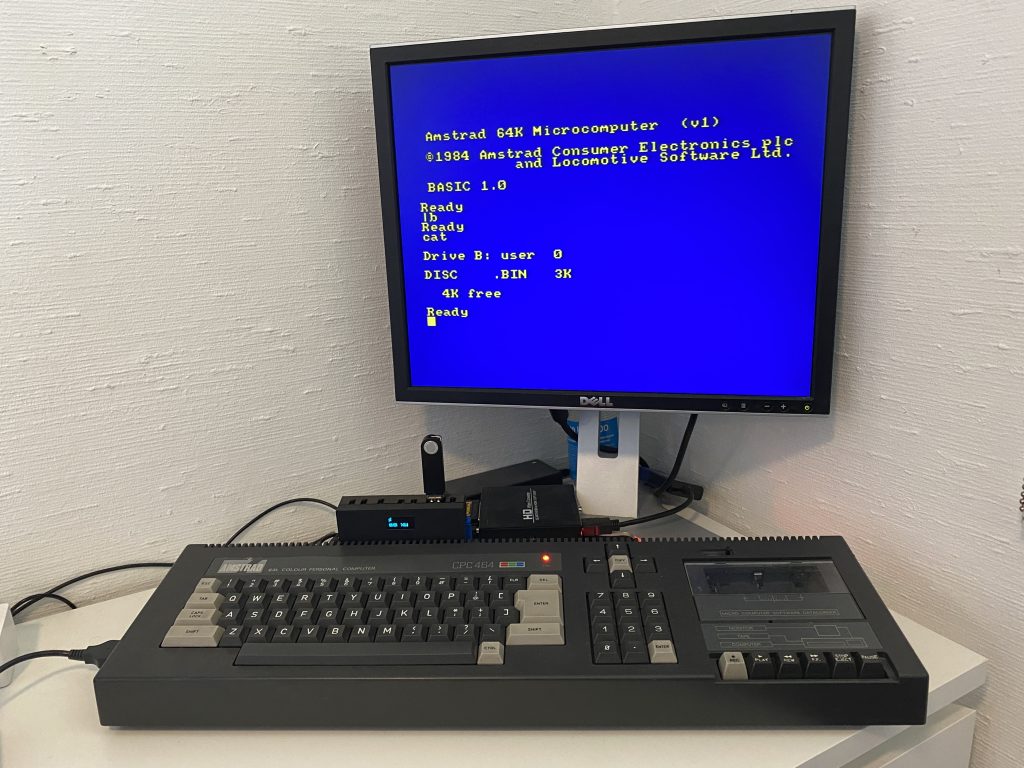 To navigate files/folders use the first three buttons. These 3 buttons allow you to navigate , mount and un-mount DSK images.

I find navigating hard on this device if you have multiple files/folders such as the below with each of those folders containing a file in .dsk format.

Here’s the issue, if I press the first to select, it will show me the file or directory name in the LCD.

Pressing the third button at this point seems to go ‘back’ one step. But it’s tricky to master and easy to get stuck in a folder or set of sub folders if you are not careful.

The easiest way to use this is to have several .dsk files copied to the root of the USB key, and then it’s very easy to use.

Launching a game is easy, once you’ve selected a .dsk file navigate to the drive letter by typing |a or |b depending on your ABBA switch settings. Then run “disc (or whatever the game is called).

Here you can see Prince of Persia running with ease. 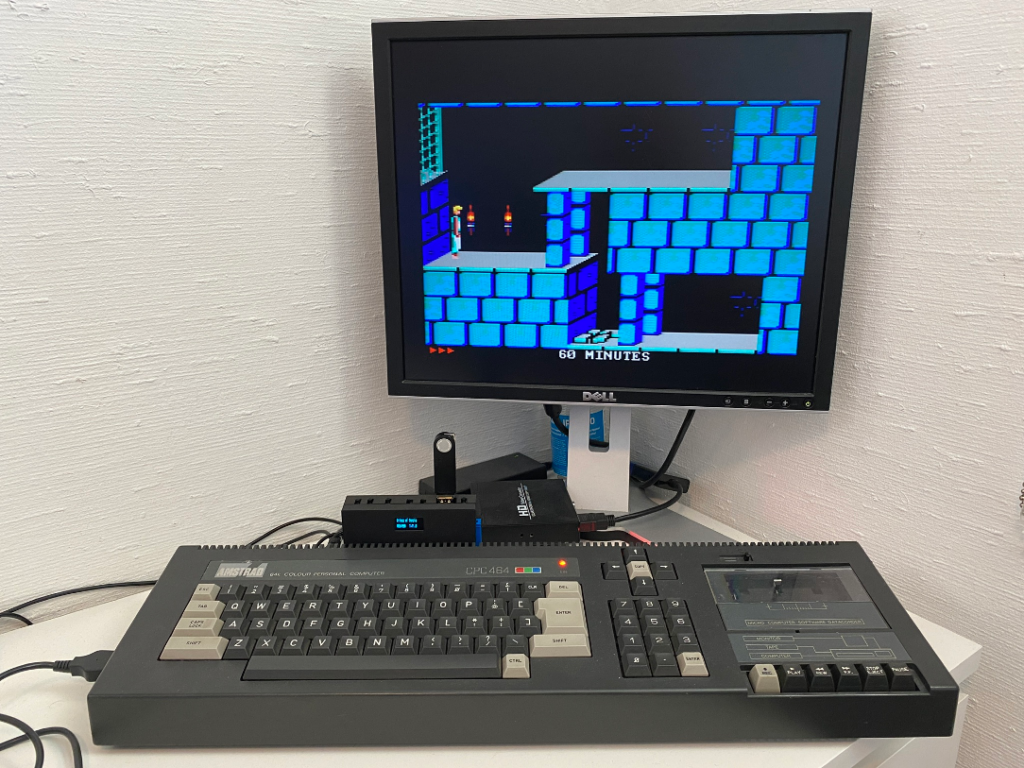 and here is Robocop, complete with audio ‘speech’ enhancements due to the extra RAM detected. 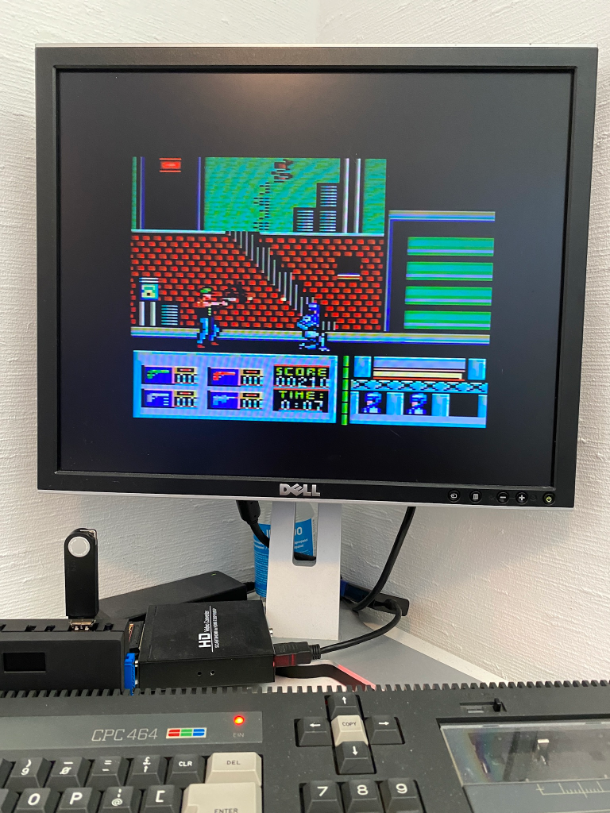 When it loads a game from the USB you can hear it emulate the sounds of reading disks, which is a cool touch, it’ll also show the virtual Track that it’s reading from, a nice touch. Loading games is about as quick as if it was loading from a real disc drive, definitely way faster and more reliable than tape.

If you’d like to buy one of these devices then head over to SellMyRetro.com, but be warned, they are not cheap. 90GBP plus shipping plus customs. I don’t get anything from the link but tell Piotr I sent you 😉

The device is really nice, very nicely 3d printed and feels solid, Piotr is a quality hardware maker and has been doing retro stuff for Amstrad and other hardware for a few years now. This is a great way to support multiple drives on your CPC 464 and to add 512kb of ram and it allows you to store vast amounts of games on a single USB drive.

You can also use this device to attach another disk drive to the CPC so that you essentially have 2 drives (A and B). Your tape deck doesn’t become non-functional either, just type |TAPE to use it.

Downloading and copying games to the USB key is easy, anyone can do it, no apps required. Starting the games is easy and fast.

The 512KB ram will allow you to take advantage of things like voice sampling in RoboCop.

If i have any gripes about it it would the navigation of games when there are folders involved, I find it easy to get ‘stuck’ in a folder particularly if that folder has sub folders, I’ll show what I mean in my coming video. Aside from that the device is 464 only and at this cost that limits it’s use to only Amstrad 464’s and nothing else. That’s a shame. Dandanators or M4 boards can  be used on multiple Amstrad devices.

Lastly, as the device is 464 specific, it would be great if it would sit flush with the back of the 464, it doesn’t (or at least it doesn’t on my 464). The top part of the printed 3d case is too low and therefore the DDI5 can’t sit totally flush, but rather at a slight angle, this might cause issues.

Well that’s my quick look at the DDI5, what do you think of this device ? stay tuned for my video, coming soon.

This entry was posted in Amstrad, CPC 464, DDI5. Bookmark the permalink.