First looks at the M4 board for Amstrad CPC

I’ve seen people referring to the M4 board on various forums and facebook groups so I was intrigued and wanted to see what the fuss was all about. I mean, think about it, an internet connection via Wi-Fi on an Amstrad computer from the mid to late 80’s. This was something I had to try out. So here are my initial thoughts on the M4 board from Spinpoint.

The M4 Board is not new, it is an expansion card from 2016 which enables WIFI access to and from CPC, Romboard and using an SD-Card as a mass storage device. That’s right the device first surfaced in 2016, and they are still in production today and you can still buy them. You can read more about it at http://www.spinpoint.org/cpc/m4info.txt

First of all, you’ll want to acquire one, to do so is relatively simple, head over to http://www.spinpoint.org and leave a comment asking how to buy one. I emailed him directly and got a quote for the board with EDGE connector and shipping for 47.5 Euros. Not cheap, but a lot of functionality to play with for the coming years.

In the photo below you can see my M4 board plugged directly into the back of my Schneider coloured CPC 464. It reveals itself at post, along with a version number of the firmware. 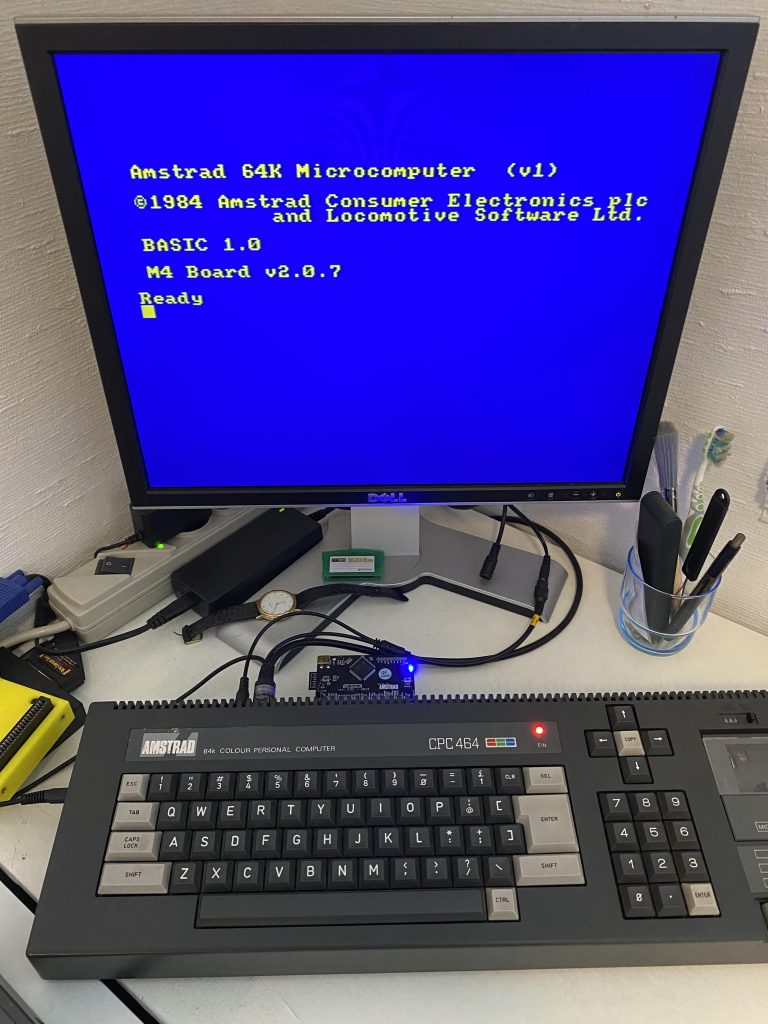 A closer look. Here you can see the board is extremely well laid out with a main chip in the center and connectors and buttons scattered around, everything is very well labelled. for those so inclined, my board is dated 2019 even though I purchased it in April 2021, I guess he has a bunch of those older PCB’s still lying around. 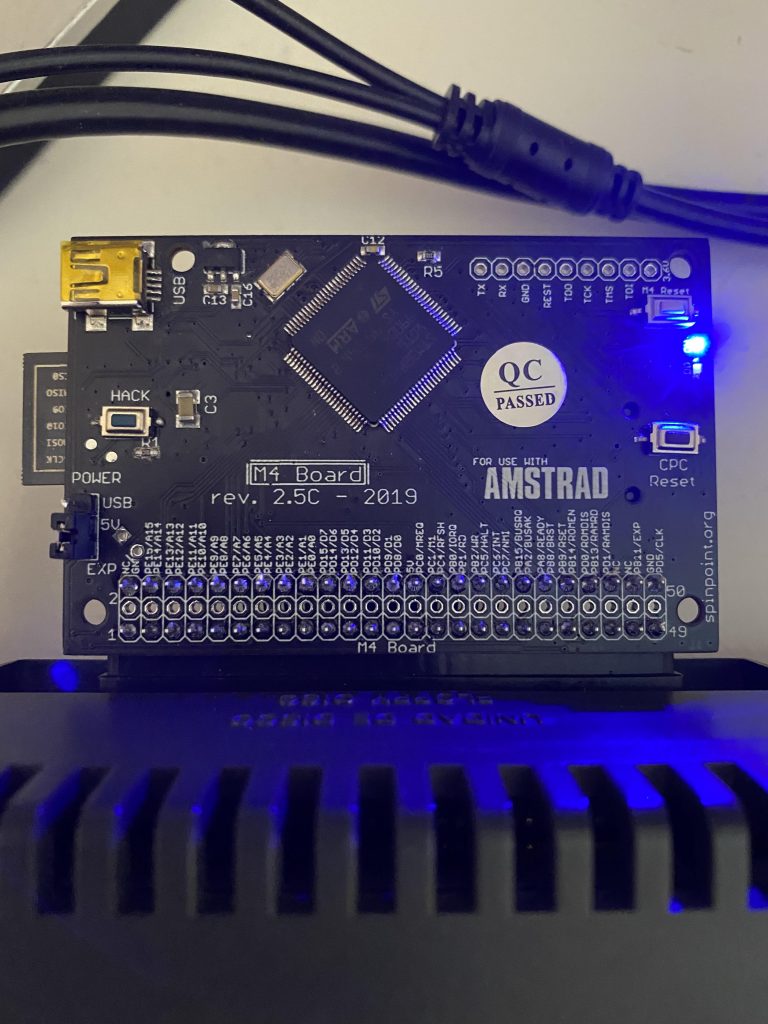 The board offers more than the cool Wi-Fi abilities, you can also plug in an SD card to gain access to gazillions of games copied to the card, you can also store up to 32 ROMs on it, and that’s a pretty cool function indeed. In this blog post we will take a look at getting it connected to Wi-Fi and copying some games from a PC to the local storage.

Getting connected to Wi-Fi

Before starting, insert a FAT32 formatted SD card into the SD slot. This is needed to store information such as your Wi-Fi settings.

To get connected to Wi-Fi you’ll need to use the |netset command along with some parameters so it knows how to connect. Below is an example of that on a CPC 6128.

Note: Don’t worry if you make a typo, the CPC has a very nice ‘copy’ ability so you can copy commands previously typed by holding down SHIFT, then move the cursor to where you want to start copying, then press COPY, it’s that easy.

The solution (on a CPC 464) is to assign a variable to the input as basic 1.0 doesn’t work well with this. So if you are using an Amstrad CPC 464 try this.

If all went well, the output should say:

This tells the M4 board to use the settings you applied using the variable as input for the parameters. 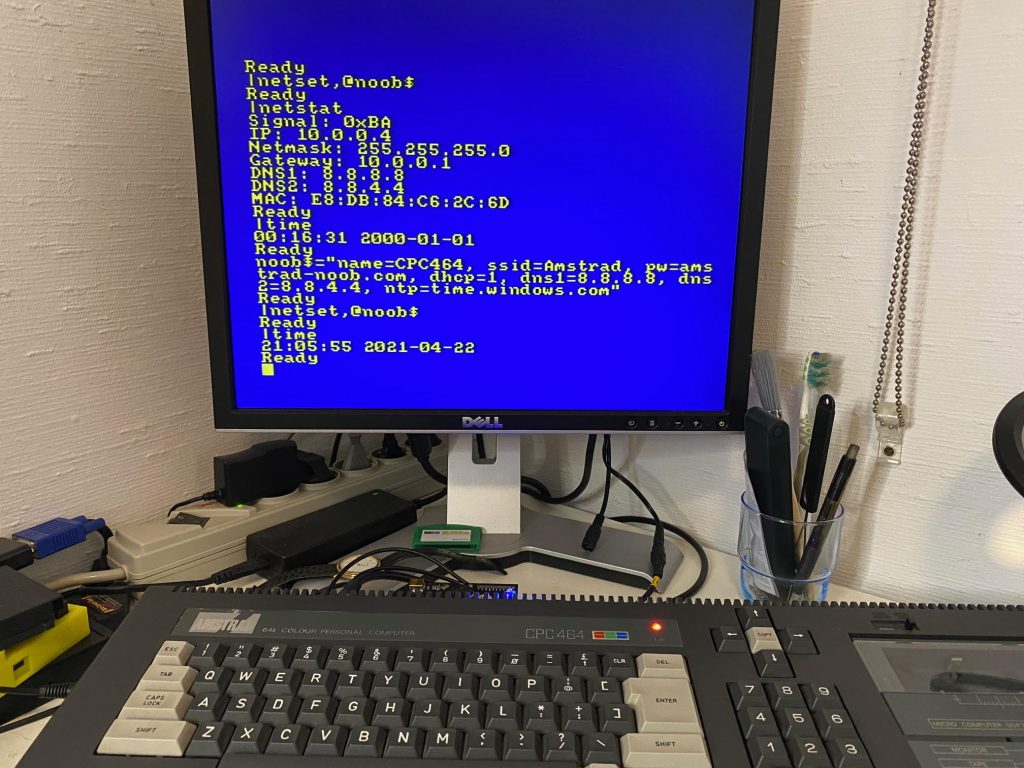 If all went well, the output should say:

It should reveal your current internet settings including mac address, dns settings and IP address. 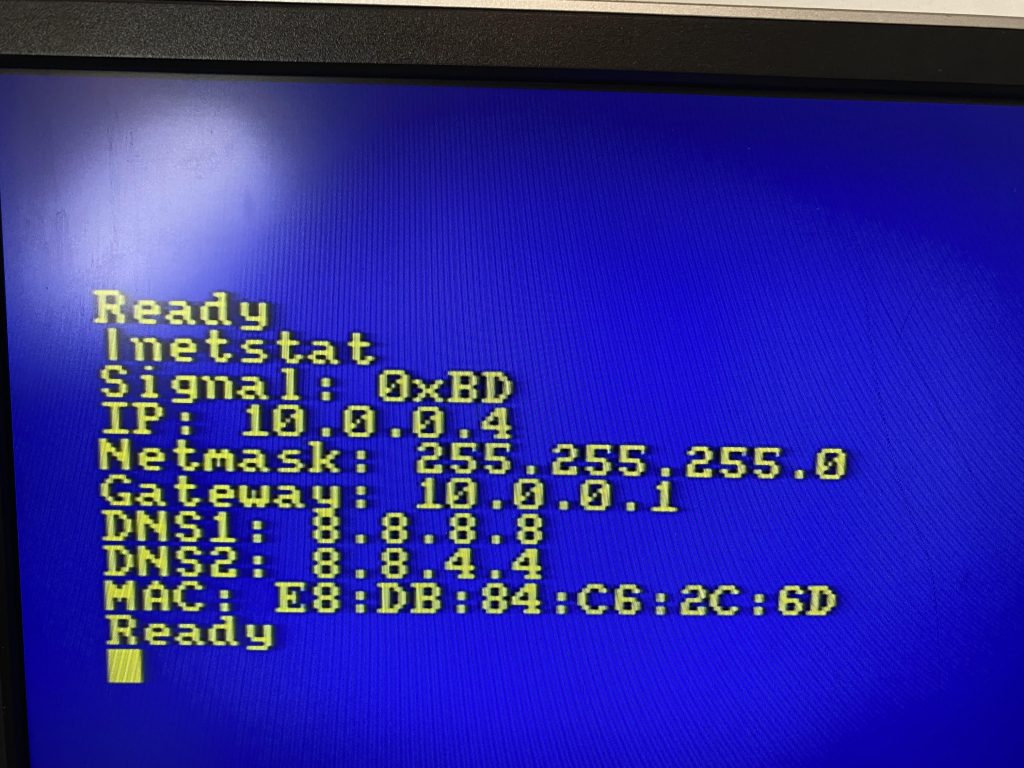 If it doesn’t and instead says “No AP found” or “Connecting” try the command again.

If it stays on “No AP found” make sure to type the SSID using the exact same case (upper/lower) as you can see the SSID being reported on your normal computer. So if your SSID shows up as “Amstrad” then use that SSID in your parameters, for example “amstrad” won’t work, it must be “Amstrad” in this example. 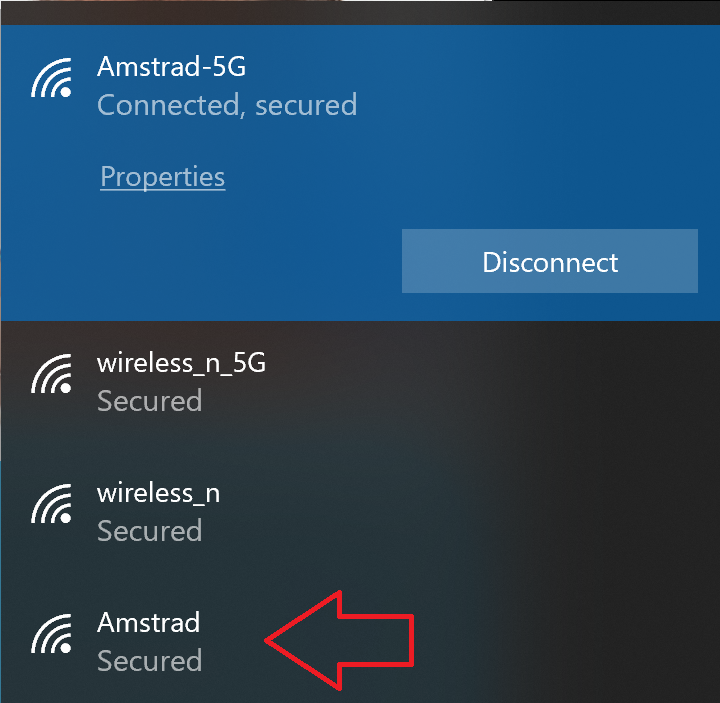 To prove things are working type

it should retrieve the time from the NTP server specified in the parameters, it took a few attempts but as you can see it is reporting today’s date/time below.

How Awesome ! The date and time are synced via the internet on an Amstrad CPC !!! 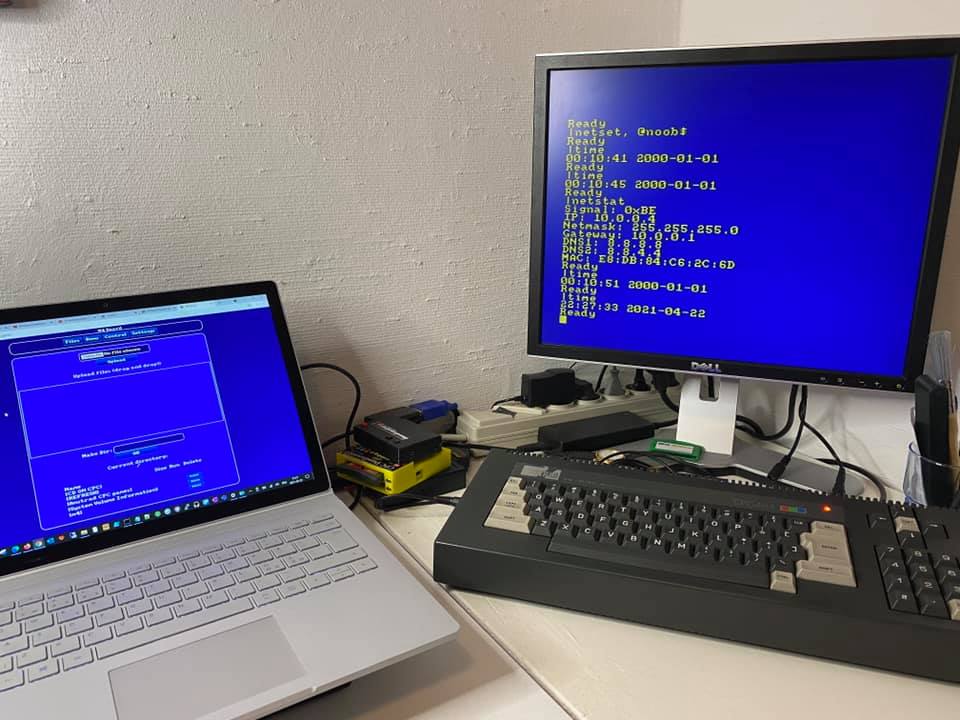 Copy games from a PC to the M4 storage

Next, on a Windows (or other internet connected computer), make sure that you are first connected to the same network router as your CPC is connected to, mine is a Netgear router for this test. In the Netgear admin interface i can see that both this computer (Surface Book 2) and the CPC (CPC464) are connected. 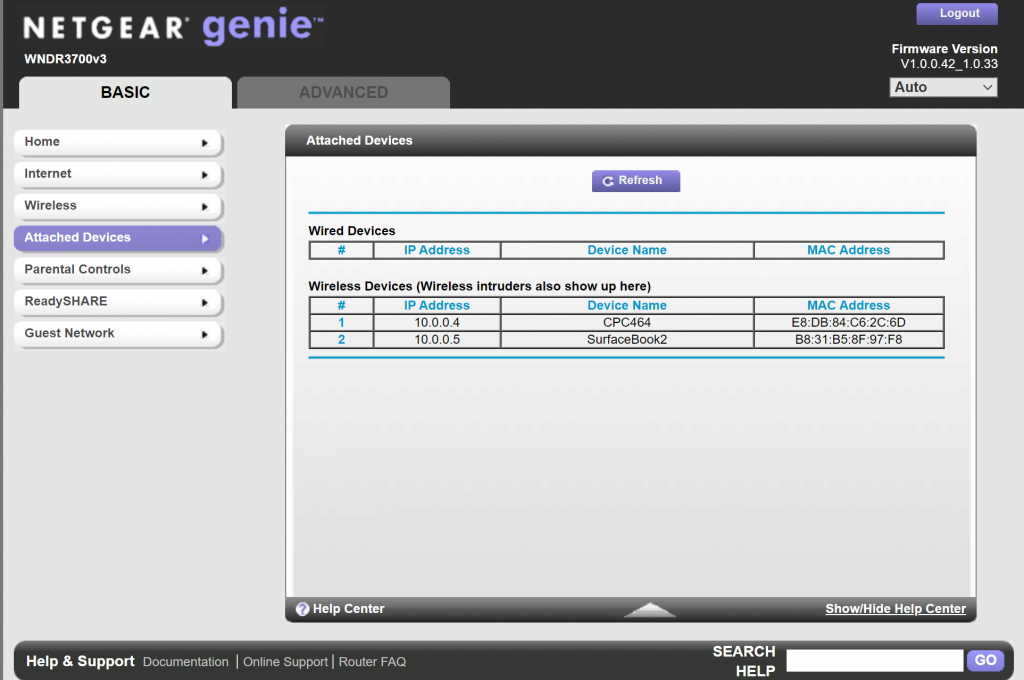 Now that I know both computers are on the SAME network, I can do stuff on the Windows PC.  Browse to the IP address of your CPC in a web browser in the following format http://x.x.x.x where x.x.x.x is the ip address revealed using |netstat

You should see something like this in your web browser. 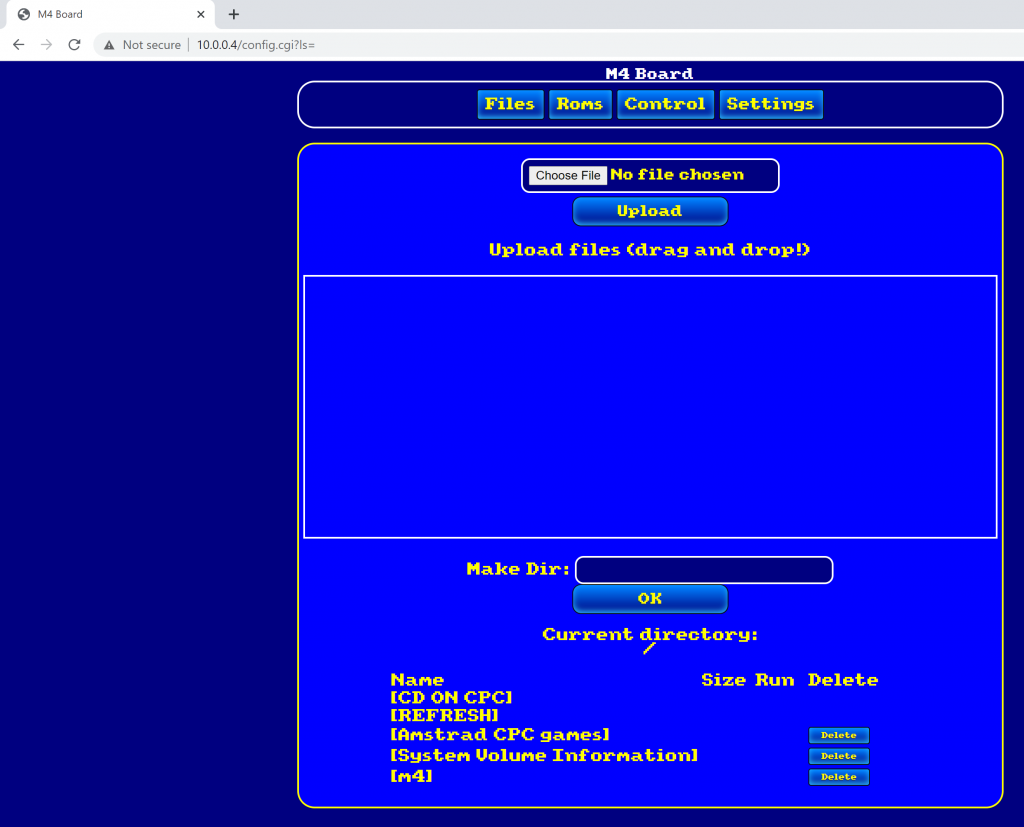 As you can see you have a bunch of options there, in this blog post I will only try and run a game by copying it to the M4 from a Windows computer. In the Make Dir: section, enter GAMES and press OK.

Next, click the GAMES directory you just created and you should see that it’s listed as the current directory 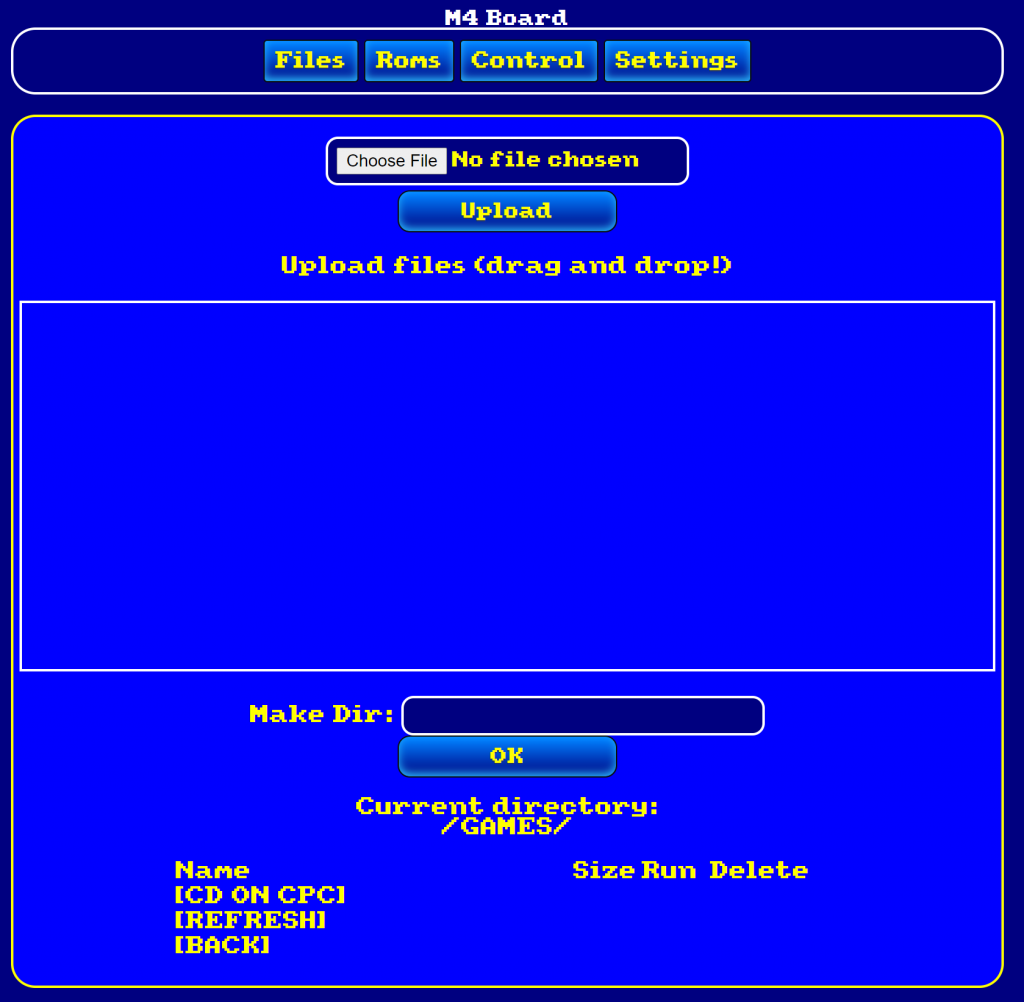 Next, you can select Choose file, select one game, and select Upload to upload one game.. 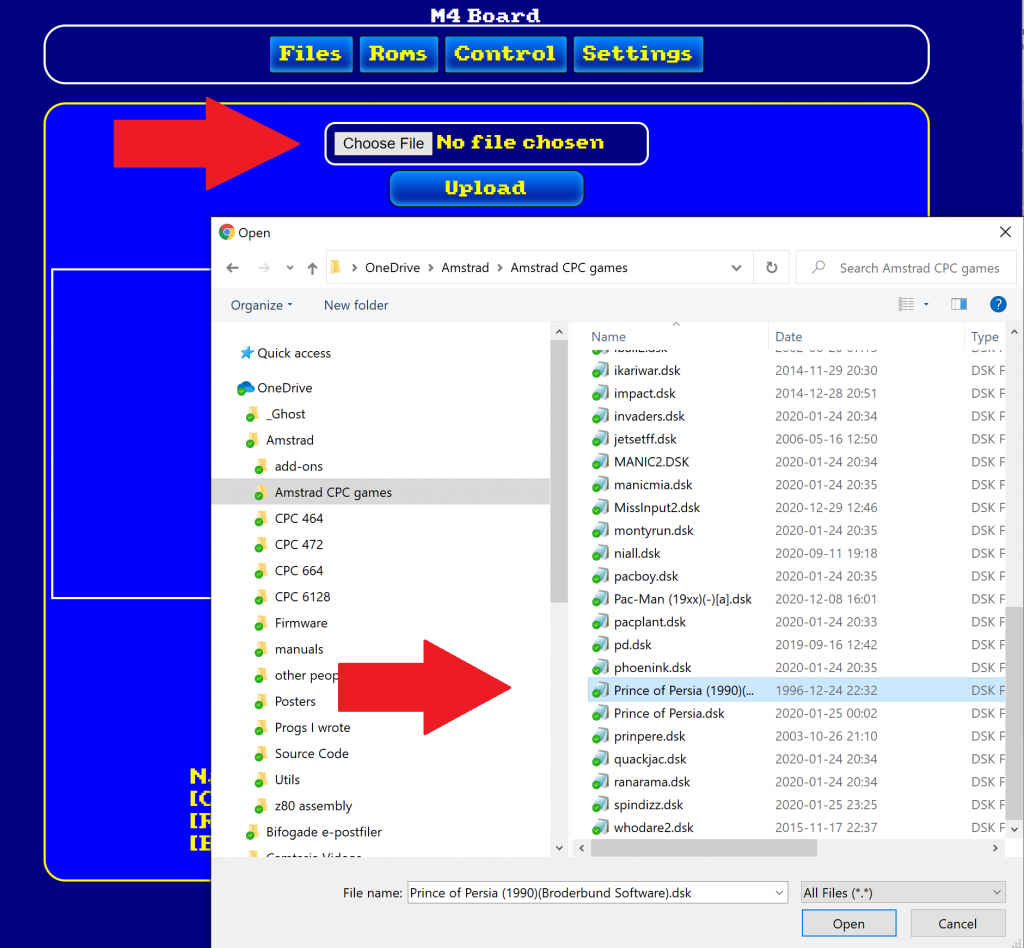 Or drag and drop some games…by selecting a bunch and dropping them into the square, this did make my browser show some ‘unresponsive errors’ but just wait… and it will work.

After mine was done copying all the files it  looked like the blue box on the left of the screenshot below. 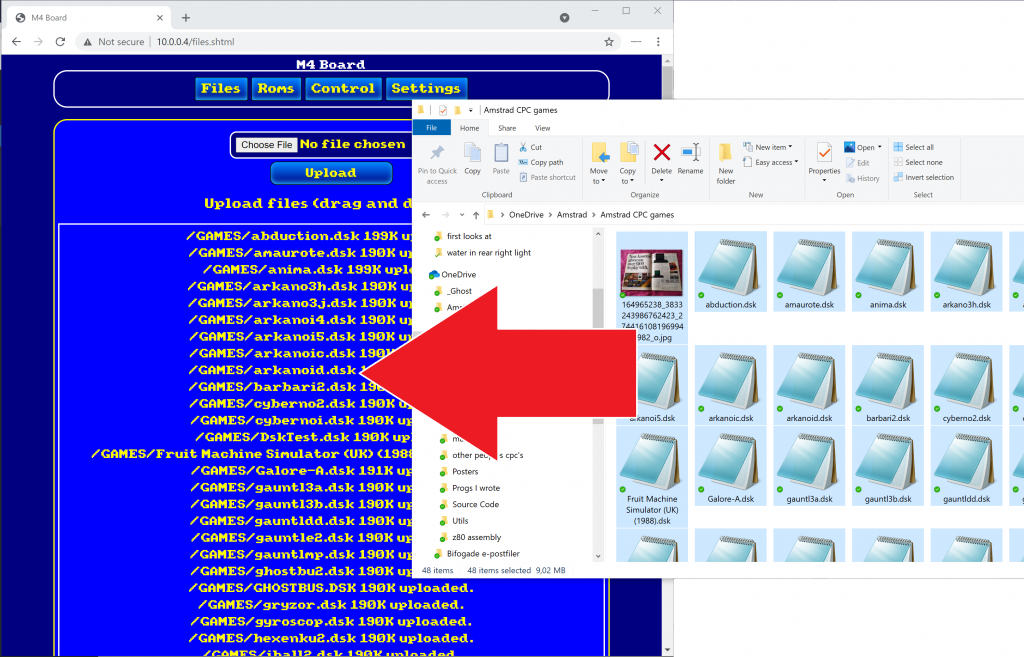 So now that’s done, back to the CPC !

On the CPC type cat, You should see the GAMES directory (and others) you just created. 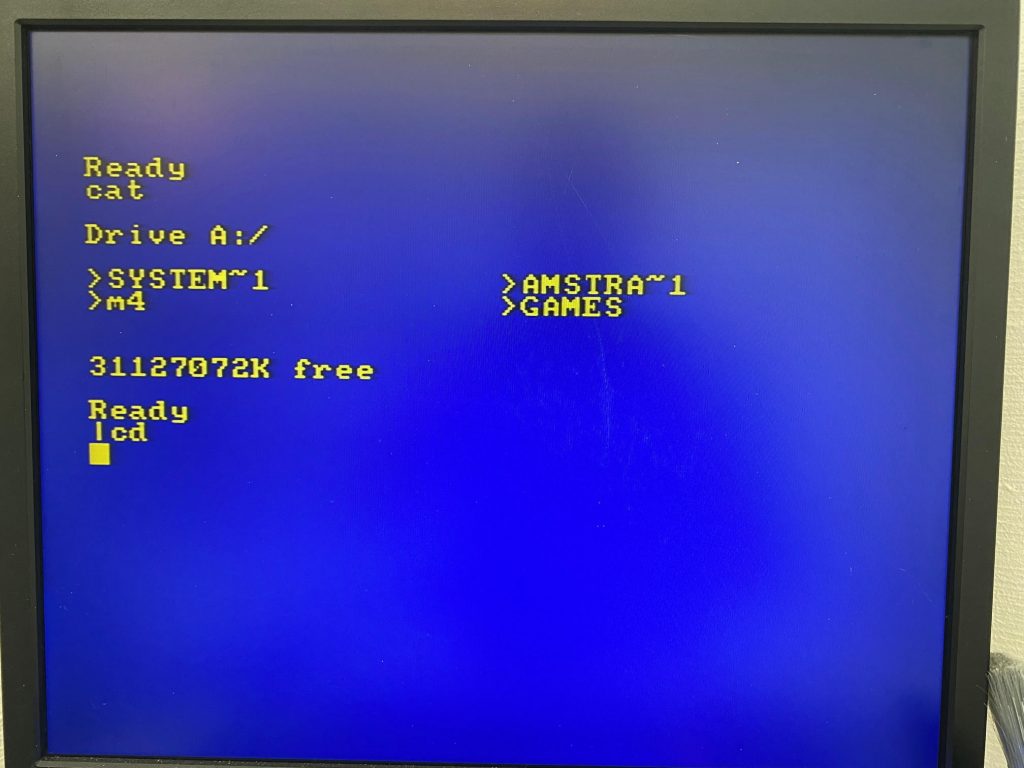 So first I typed cat followed by pressing |cd and enter, this then prompts you to type something so I typed the name of the directory, games and pressed enter again, it said Ready. 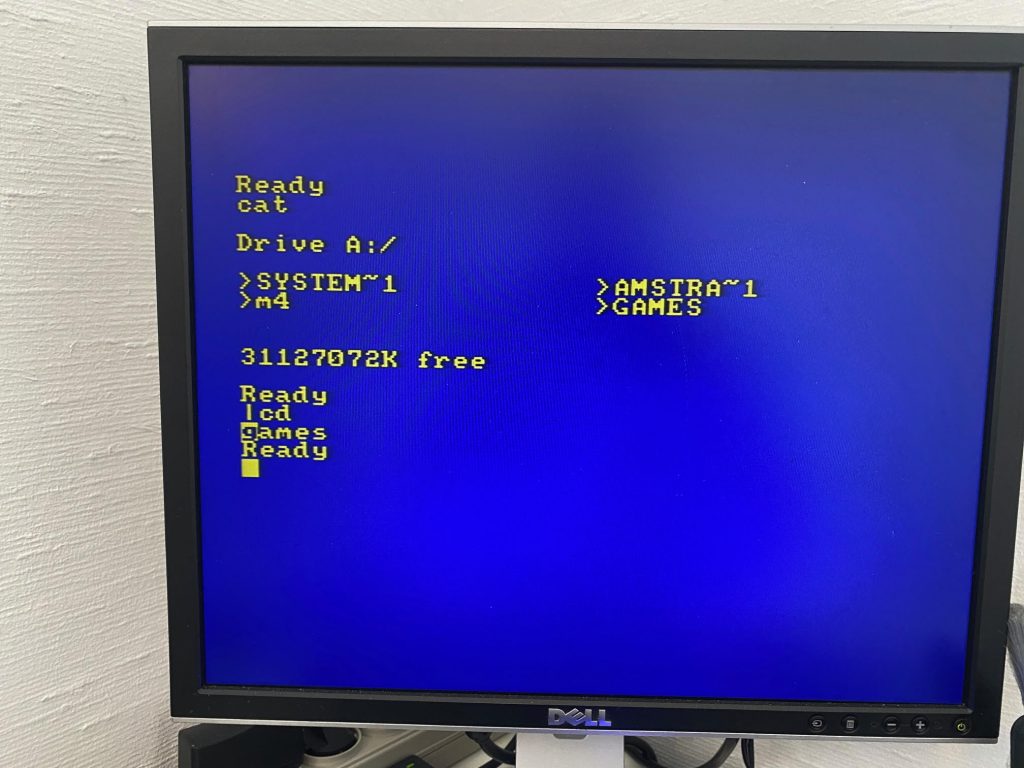 At this point I can type cat again to see what is in that directory. 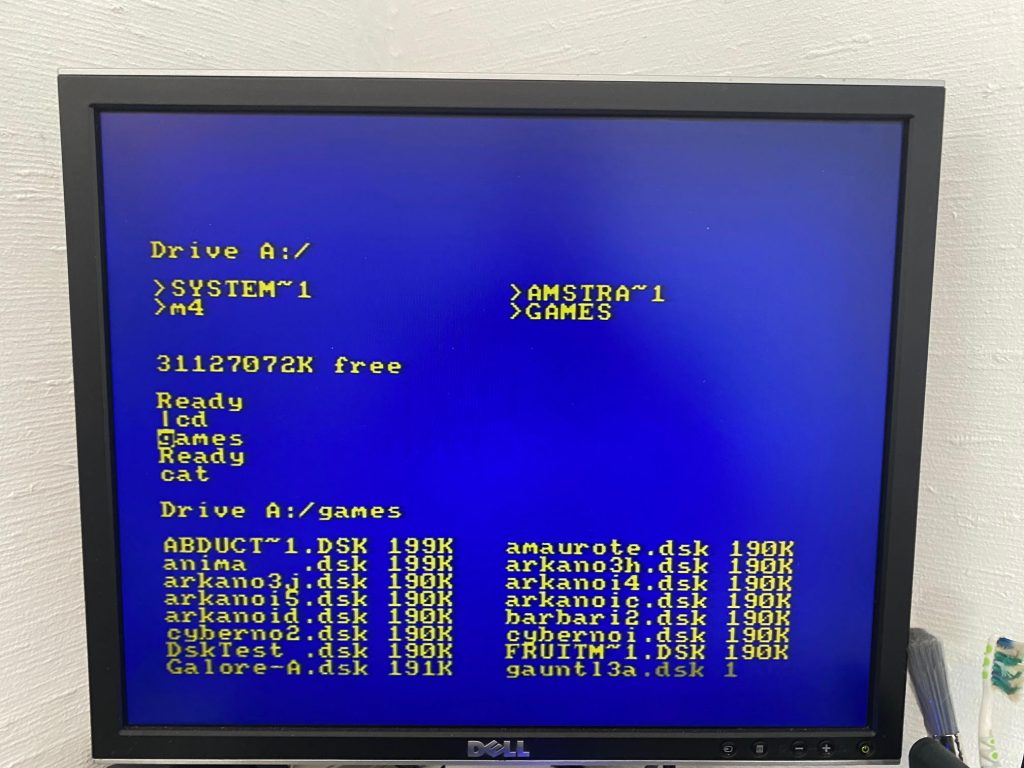 As you can see all my games are in DSK format (disk). To launch them, use the |cd command and press enter. Next, enter the name of the game disk, eg: whodare2.dsk

If all went well, it has mounted that disk and you can see the contents of the disk itself using cat. 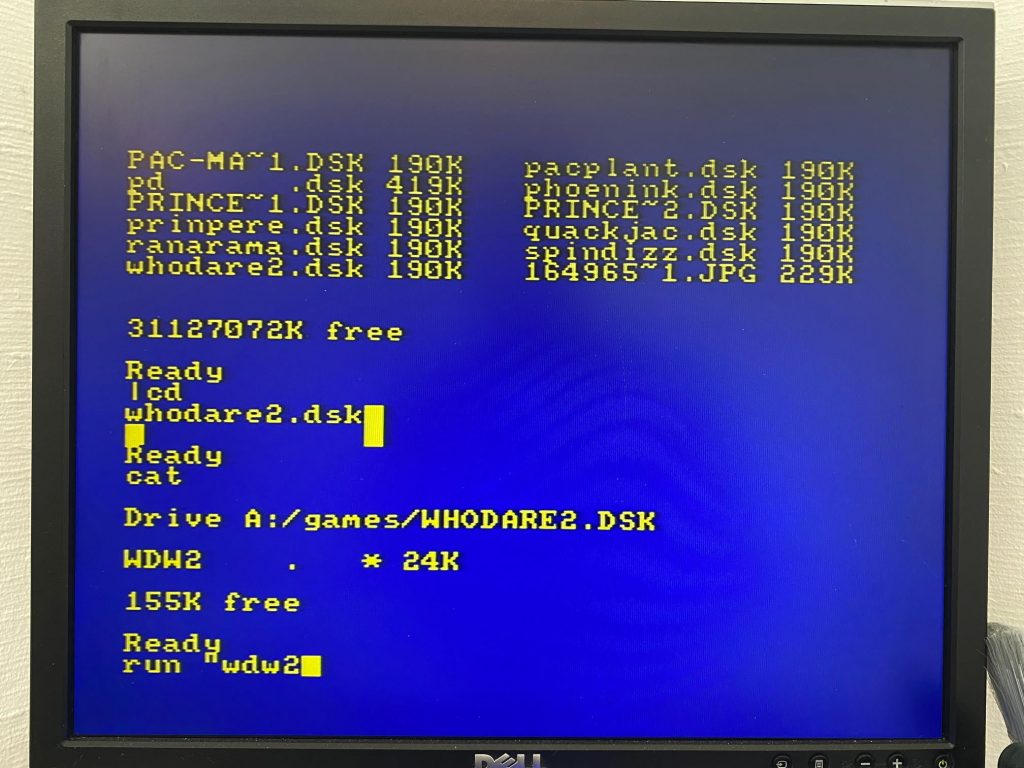 finally, to run the game type the name of the game as normal 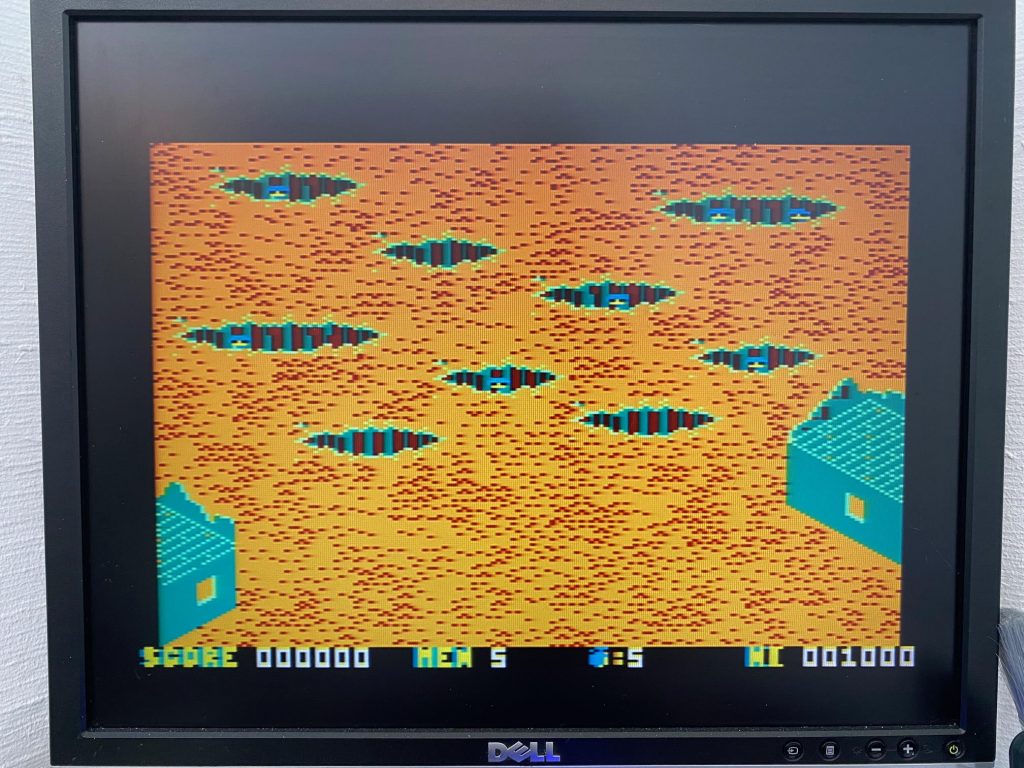 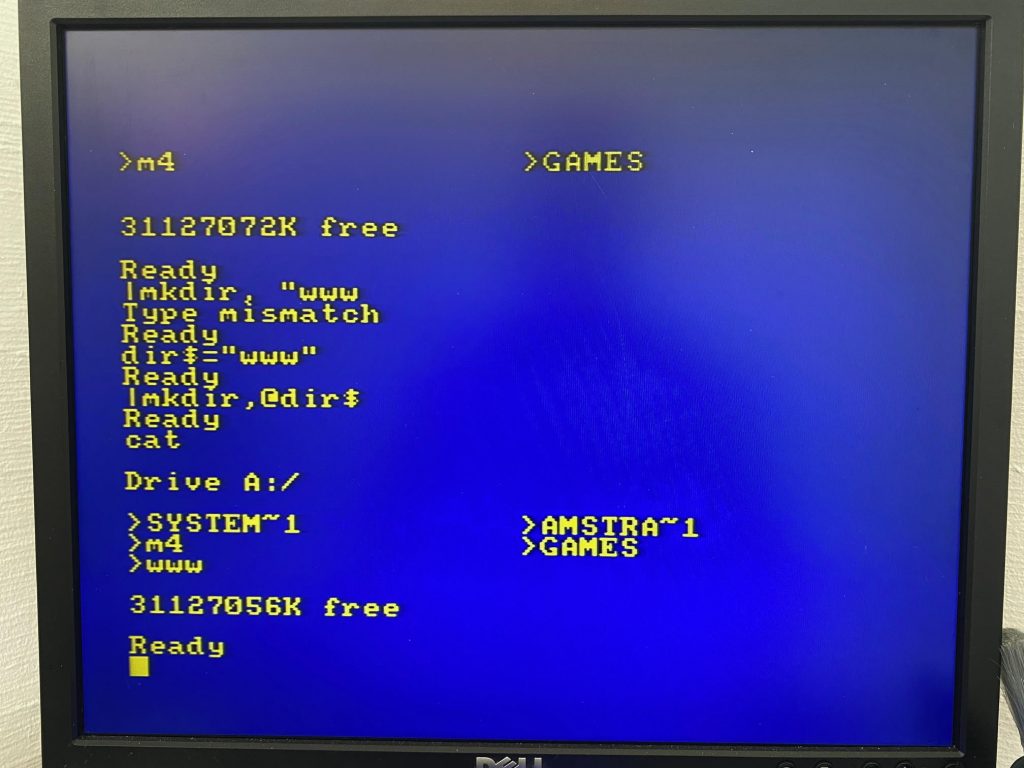 Now that the directory is created use |cd as described previously to navigate to that directory.

There’s currently nothing in the “www” directory. To download a game from the internet we are told to use the following command (on a CPC 6128).

then issue the following

This works fine but the downloaded file is 1k instead of 190k,see below screenshot. 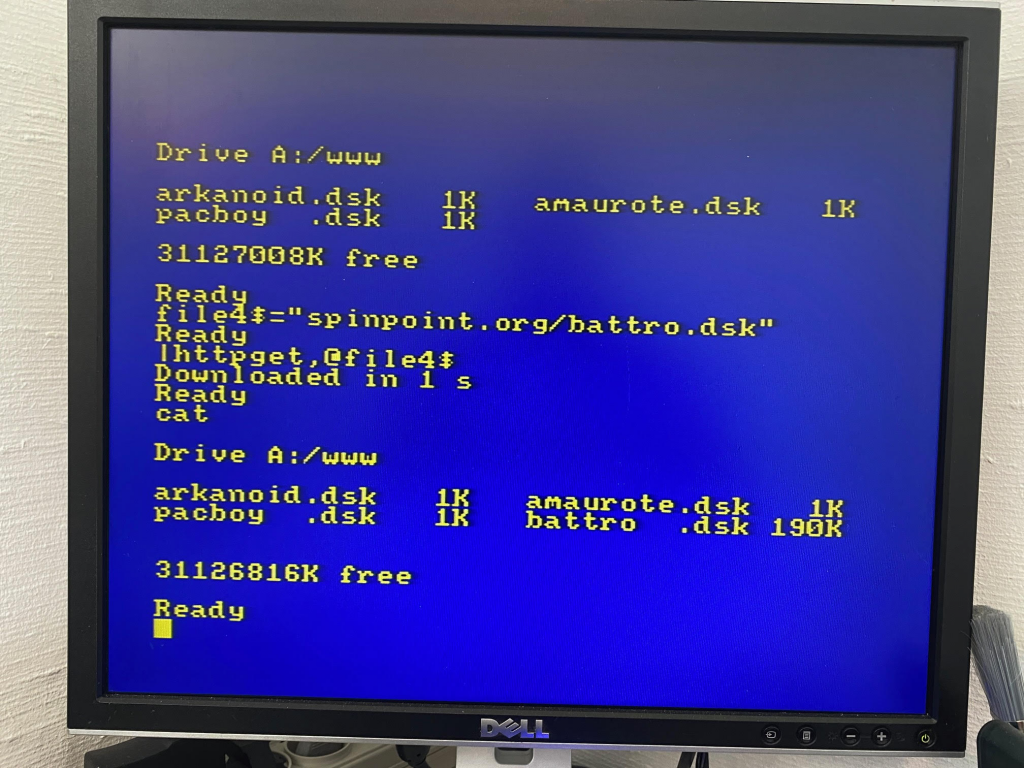 After some tests and emails to Duke it was confirmed that the M4 board doesn’t support HTTPS, only HTTP. So for now I’ll download the following file from Dukes HTTP site and I’ll work on getting a HTTP version of my amstrad-noob.com/games available.

then issue the following

after mounting the downloaded file using

I was able to run the demo ! 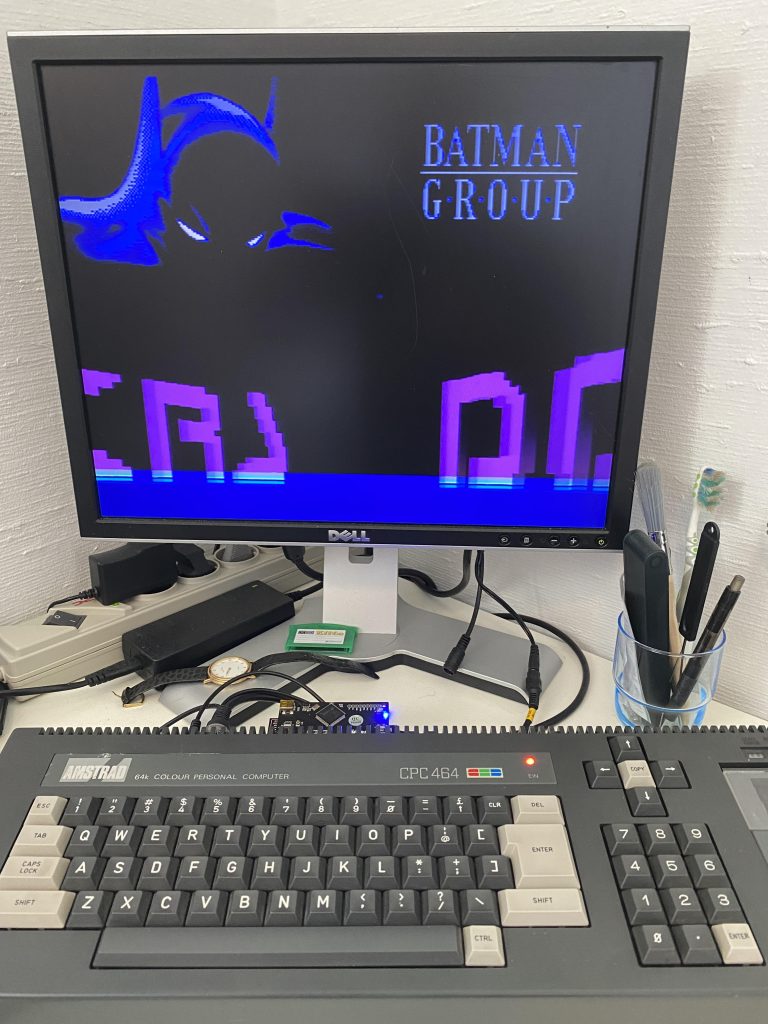 After using the device I can say I’m definitely impressed, it gives internet and storage support (32gb max) to the Amstrad and that’s awesome. I wish it also supported HTTPS but it doesn’t. It’s a bit trickier to use on a CPC464 due to the way |RSX commands work  on that platform, much easier with Basic 1.1.

This entry was posted in M4 board. Bookmark the permalink.