This is part 3 of a blog series I’m doing to catalog my adventures through some of the programs I wrote back in 1988.

So let’s get stuck in. I resumed where I left off in the last part and that was to continue converting the source code into meaningful blocks of code, so that means converting the ASCII to readable text and once done, modifying the labels pointing to those text blocks. I also hope to understand how those blocks of TEXT are formed in order to understand how the functions that print them to screen know where the beginning and end of a TEXT block occurs.

At the moment I’m doing this on my Surface Book 2, but it would probably make more sense to run this on my gaming computer downstairs in my office to avail of my 3 monitor setup, I might try that later.

In the screenshot below you can see the WinApe emulator running Disced, and in the left pane we have the disassembly showing the section I’m working on (Press F7 in WinAPE to disassemble), with the source code on top and the hexadecimal/ASCII representation of that code to the right of the lower left pane.

In the Lower right, you can just make out that I’ve got Notepad++ with my source code  that I exported in Part 1 and I’m slowly adding the text but more importantly including every space, and opcode that is listed. 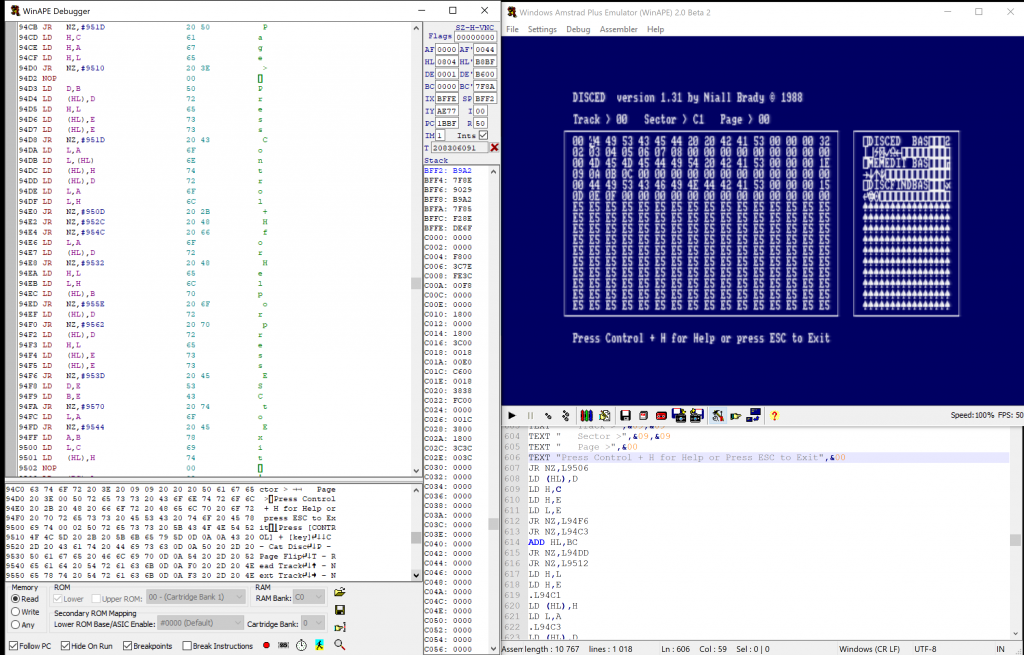 Marking the end of a block of text

I’ve already noticed that two lines of text ended with a NOP (or NULL) code (&00). For example:

Hopefully this means I’ve found out how my TEXT writing functions are working within the program as those functions must know where the beginning and end of a text block is.

Here you can see two of those NOP (or NULL) codes at the end of some TEXT blocks. 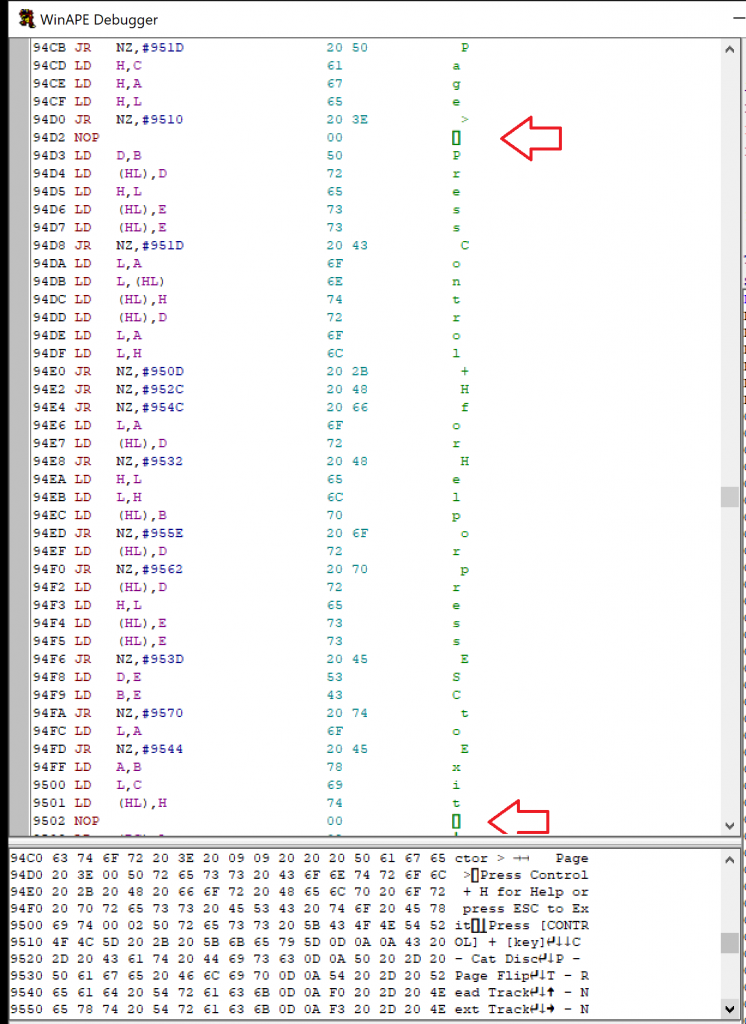 A slight scroll down through the code and I can see this pattern of ending TEXT blocks with NOP codes (or NULL) repeated, so I think I’m on to something here. 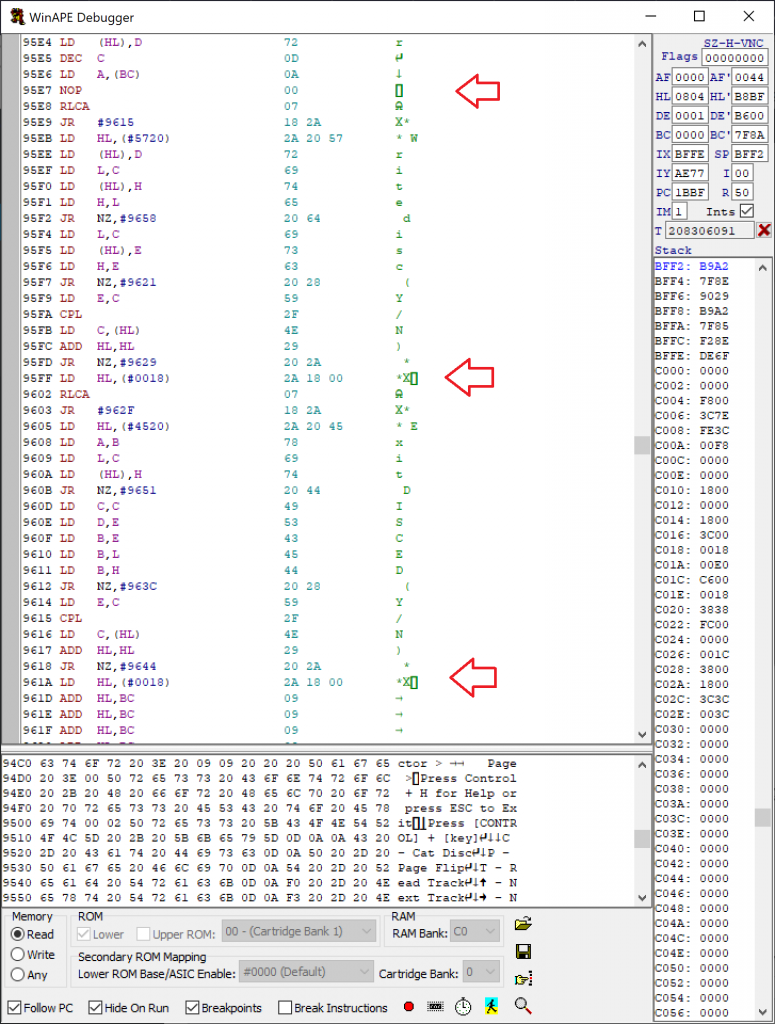 This pattern signifies a carriage return (&0d) followed by two line feeds (&0a). I use this pattern or a similar pattern with just one line feed repeatedly throughout the text blocks.

This is to make the TEXT displayed on screen more readable (formatting the text). 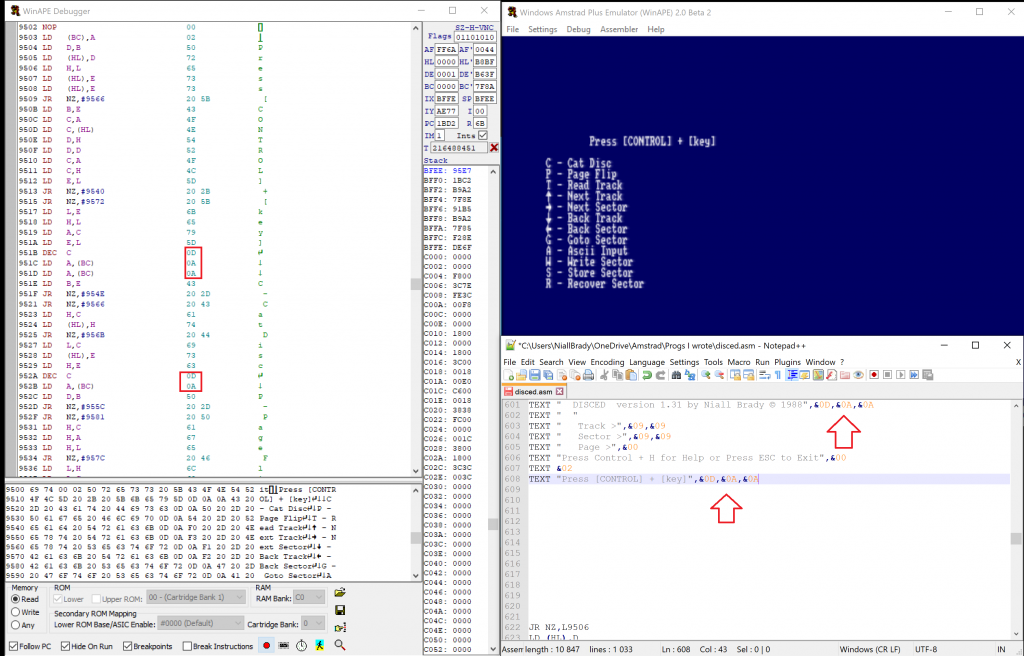 This use of line feed and carriage returns to denote Newlines is explained here and is not Amstrad CPC specific. My next challenge was the character set of the Amstrad CPC in relation to up arrow, down arrow, left arrow and right arrow. These characters are listed in the following wiki.

But when I looked at CharMap in Windows 10 I didn’t see anything quite the same, so I instead added those special characters as byte codes in the TEXT blocks, like so. 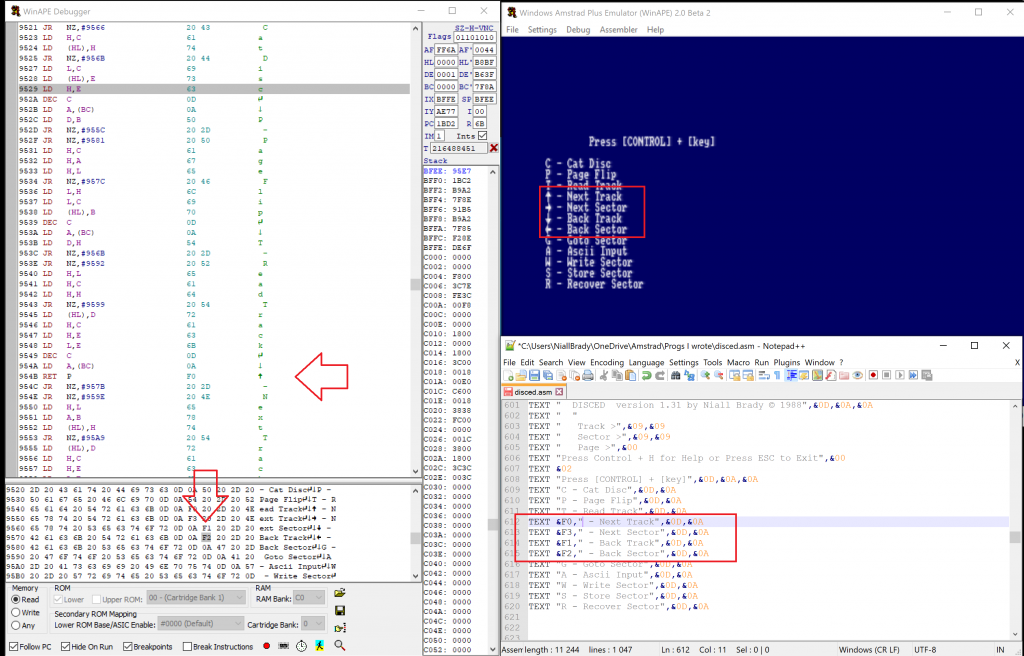 After reading that Amstrad Character MAP wiki page, I could see that the &02 code was used to turn off the text cursor, this makes sense as it was just after the the title text and before the graphics routines start on the front page of Disced, so I added a comment to that effect in my source code.

This brings back memories to me from when I coded it originally, I think that if you didn’t turn off the text cursor prior to drawing graphics (lines etc), that you’d see a flashing cursor move across the screen, I can experiment with this later on when I actually try to Assemble the finished source code (if I ever finish it :P).

As you can see highlighted here… 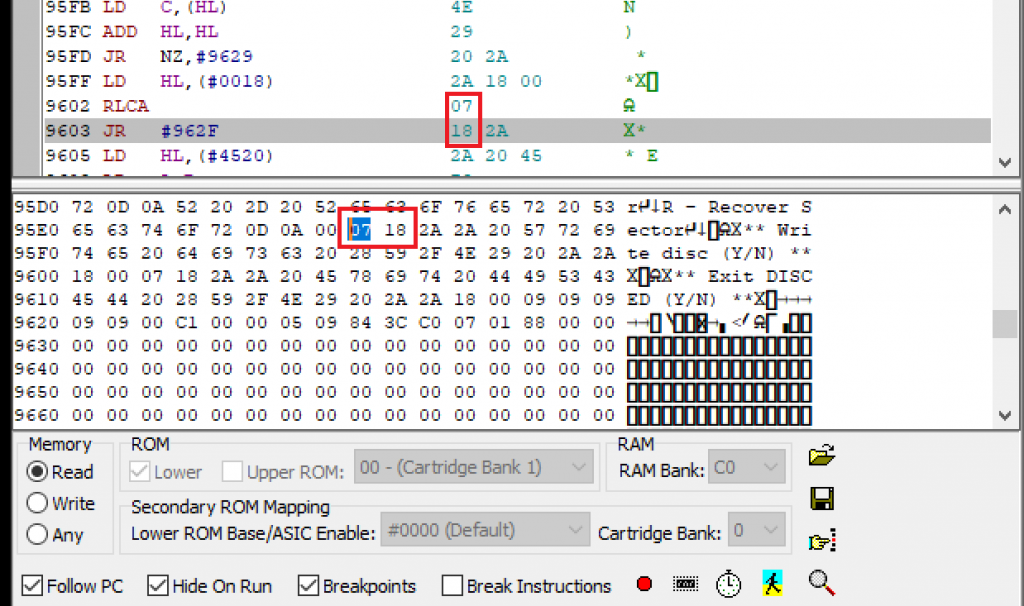 So when I looked at the WIKI page it explains that those codes could be for BEEP and  to exchange the PEN and PAPER inks (reverse video effect). 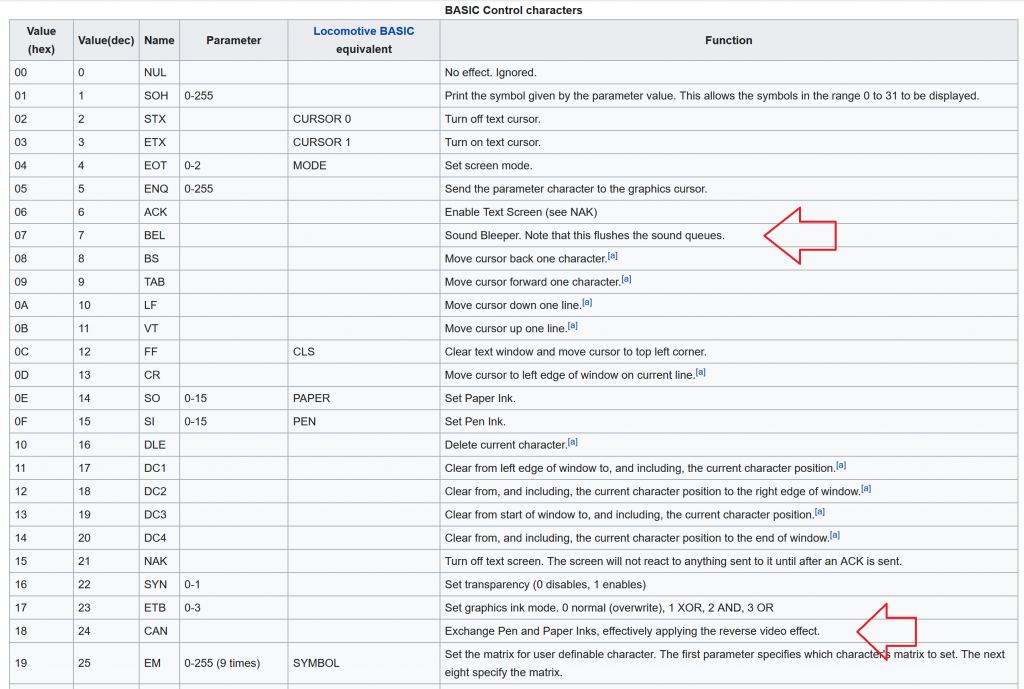 So I tested it, and sure enough, when I press ESC in Disced it BEEPS and shows the text in reverse video ! as you can see here in the GIF (it won’t BEEP however, but trust me that’s what happened).

So I decided that was enough for this part ! here’s the final look at the source code I modified this morning. 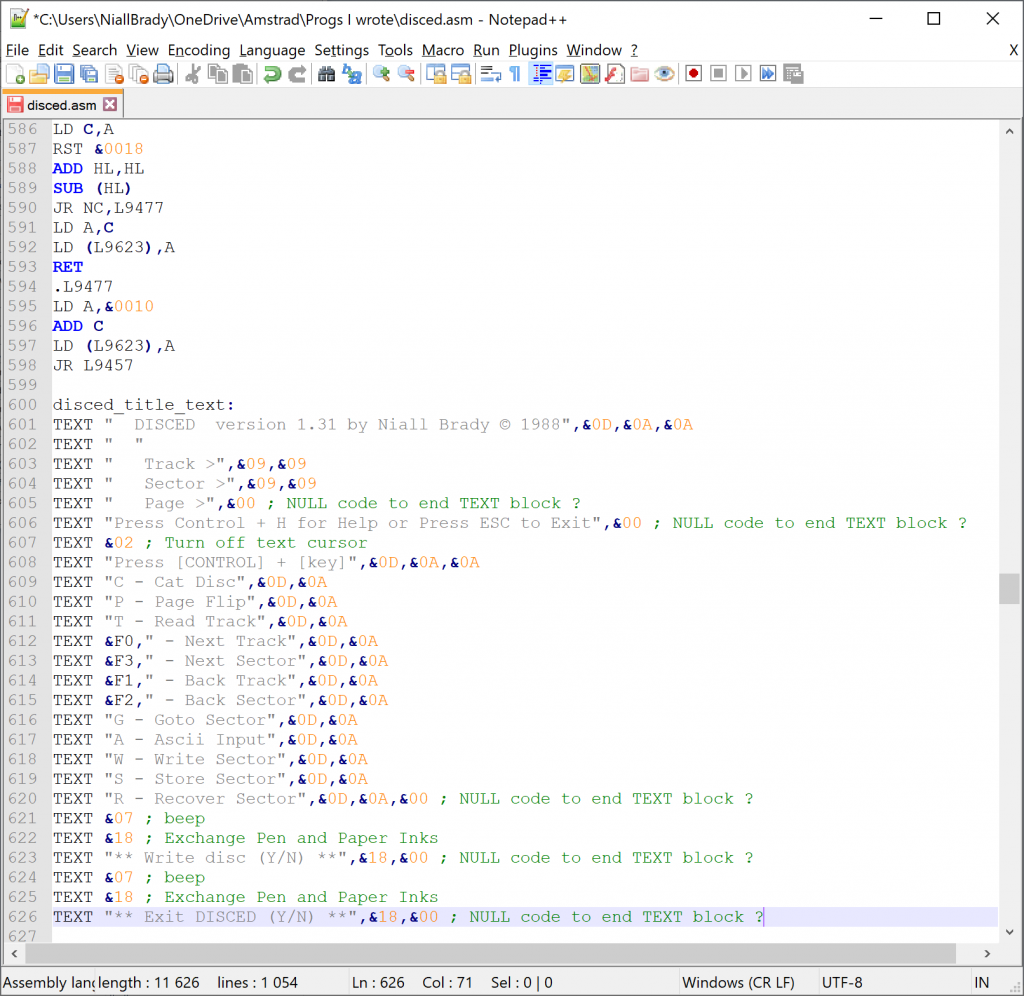 Please join me in Part 4 where we’ll no doubt learn more about the inner workings of Z80 machine code on a CPC.